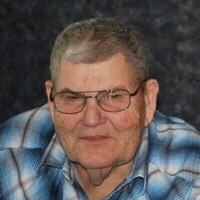 A prayer service was held at 6:00 p.m. Sunday, July 17 at Waterbury Funeral Service, 400 4th Street, Sergeant Bluff. Funeral services were held at the First Baptist Church of Climbing Hill at 10:30 a.m. on Monday, July 18. Burial will be at the West Fork Township Cemetery, followed by a luncheon at the Nazarene Family Life Center.

Walter Dwain Davis, better known as “Ping”, was born in Luton, Iowa to parents Walter E. and Mabel (Welty) Davis on December 12, 1934. He lived his life on a farm outside of Climbing Hill, Iowa. His final days were spent at the Pioneer Valley Living and Rehabilitation facility in Sergeant Bluff, Iowa. Ping lived a full and happy life.

Ping loved farming. He had many fond memories of trips to the Stockyards with his dad, Shorty. He enjoyed his time outside taking care of animals and the yearly planting and harvesting crops. As a young man,

Ping liked to race cars and build things. He enjoyed hanging out with friends and finding trouble whenever possible.

Ping enjoyed playing cards and having coffee at The Barn. In 2000, Ping met his significant other, Elaine Streyffeler. They were together from September 2000 until Elaine’s death in October 2020. The couple enjoyed short trips around the Midwest and following activities of grandchildren and great grandchildren.

Although Ping was sure that computers would be the ruination of our world, he was always on top of the newest technology and really enjoyed photos and videos from family and friends.

One of Ping’s favorite activities was going to auctions. He loved all kinds of auctions and purchased whatever he wanted! Buffalo, classic cars, a firetruck, and toy tractors were some of his favorite buys.

Ping’s request was that no one sit around and cry about him. He was confident that he and Jesus would meet in heaven and it would be a joyful time.

Family who will cherish his life include his sister and brother-in-law, Delores and Bob Arnold. His Kansas City family of nephews and nieces will miss Uncle Pingo. Dwane (DeAnne) Arnold, Diane (Pat) Byrnes, and Michelle (Craig) Shipley.

His special daughters and their husbands, Sherry (Dale) Swan and Tami (Garrett) Little. He was loved by several, young and old, who considered him Grandpa Ping.