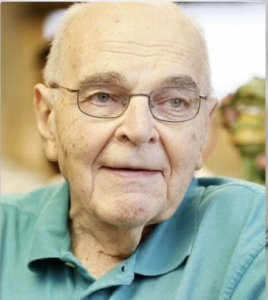 Charles Edward Hamm, M.D. passed away July 16, 2022, at the Kingsley (Iowa) Specialty Care Center, following a nearly 20-year battle with Parkinson’s Disease. A special and heartfelt thank you goes to the nurses, staff, and administration of the Care Center for your many years of kind and tireless care for Dr. Hamm. We know he appreciated each and every one of you.

Charles joined the First Mennonite Church of Beatrice as a boy. During his preparation for membership, Charles and other family members would often listen to the old Back to the Bible Broadcast radio program. After hearing radio Bible preacher Theodore Epp, and with counsel from his church catechism teacher, Charles went out to a corn field where he gave his heart and life to Jesus Christ. Charles’ strong faith in the Lord Jesus guided him through many difficult times and was his anchor for the rest of his life.

Charles completed his pre-med studies at Bethel College in North Newton, Kansas, graduating with a degree in Biology in 1955. Following graduation from Bethel, he moved to Omaha, Nebraska and began working as an orderly at the old Lutheran Hospital with plans to fulfill his dream of becoming a medical doctor. While working at Lutheran Hospital, Charles met Virginia Stevenson, a Candy Striper also working at the hospital. Legend has it that Charles and Virginia fell in love while together moving a body to the hospital morgue.

Charles and Virginia were married January 11, 1957, at the Grace Baptist Church in Omaha. Following work at the Douglas County Health Department and the birth of two sons, Charles began his studies at the University of Nebraska College of Medicine, graduating with his medical degree in June 1963.

Following a one-year General Practice internship at Immanuel Hospital in Omaha, Charles and Virginia and their now three children (Doug, Tom, and Beth) moved to Kingsley, Iowa in the summer of 1964, where Charles joined the Kingsley Medical Clinic led by Dr. Robert Powell. Charles and Dr. Powell enjoyed a 40-year practice of serving patients from Kingsley, Pierson, Moville, Correctionville, and other farming communities in the area; they also became lifelong friends. Along the way, Charles and Virginia welcomed their fourth child, Susie, born in 1966.

Charles’ faith in the Lord Jesus framed his entire career. In his care for his patients, his friendships, his church, or his family, God was always at the center. Charles will be remembered for his quiet and gentle spirit, smile, his quick wit, and way of comforting one of his own family members, a patient, or a friend. Charles was a faithful member of Central Baptist Church in Sioux City, Iowa, and served for many years as an Elder in the church.

His faith was behind his passion for the community of Kingsley and area as he served on the Kingsley Library Board, the Kingsley-Pierson School Board, and the Family Practice Residency Program for Siouxland Board. Following Jesus meant he also cared deeply about Bible College education and world missions, thus serving on the Board of Directors for Grace University & Child Evangelism Fellowship, Inc. Even in death, his care for others—walking in the footsteps of Christ—was on display as he asked his body to be sent to the University of Nebraska College of Medicine to aid in Parkinson’s Disease research.

Charles was preceded in death by his beloved wife of 58 years, Virginia; his parents, his five brothers and four sisters-in-law: Alfred and Rachel (Odlund) of Brainerd, MN; Gerhard and Velma (Hamm) of Paso Robles, CA; Donald and Miriam (Glanzer) of Bridgewater, SD; Henry Jr. of Centralia, WA; and Harold and Letha (Epp) of Beatrice, NE; as well as two nephews, Ben Hamm and Alan Hamm.

Survivors include Charles’ children Doug and Jan (Alford) of Omaha, Tom and Cathy (Wade) of San Diego, CA, Beth and Howard Brown of Omaha, and Susie and Jeff Edgar of Kingsley; Grandchildren Ryan (Kate) Hamm, Johanna (Seth) Wayman, Katie Hamm, Nicholas Hamm, Jeremy (Mariah) Hamm, Jonathan (Meredith) Hamm, Joshua (Alexa) Hamm, Elisa (Drew) Overturf, Rachel (Andrew) Hassler, Nathan Brown, Haley Brown, Abbie (Jake) Burnside, Stephen Edgar, Annie (Josh) Espinosa, and Luke Edgar; 19 (soon to be twenty) Great-Grandchildren; Brother and Sister-in-law, Fred and Ann Stevenson of Neosho, MO; and a host of much loved nieces and nephews. He is also survived by the many friends, patients, and communities around the world he touched by his presence and kindness through his service as a doctor, board member, and church leader.

Tax-deductible memorial donations may be given to the Charles and Virginia Hamm Legacy Fund—For God’s Glory and to Expand His Kingdom, by making your check out to the Waterstone Foundation, and in the memo line writing “CVH Legacy Fund #136132.” Donations will then be distributed to Charles and Virginia’s selected local and global Christian charity organizations.