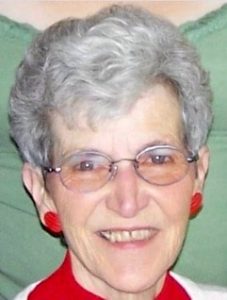 Maroldine was born August 25, 1940, the daughter of Marold B. & Frances L. (Jolley) Smith in Sioux City, IA. She grew up in Sioux City, graduating from East High School in 1958. There she participated in band, choir, operetta and The Dreamaires. She then attended and graduated from Morningside College in 1962 with a B.A. degree. She soon started teaching at newly recognized Woodbury Central school.

She was a celebrated high school English, Speech and Drama teacher. She also happily directed numerous high school plays. Members of her family and friends often remarked they couldn’t go anywhere without a former student of hers excitedly calling out to her!

She and Andy Irwin were married August 4, 1986 in Elk Point, SD. They enjoyed many summer fishing trips. Andy passed on September 13, 1994. She married Art Grade June 20, 1998 at Salem Lutheran Church, rural Correctionville, IA. Maroldine and Art farmed until he passed away December 5, 2010. Following his passing Maroldine continued to live in the Kingsley and Sioux City area until moving to Bickford Cottage in Sioux City.

The family wish to extend special thanks to Bickford Cottage of Sioux City and the staff of Hospice of Siouxland for their extra care and concern for Maroldine.