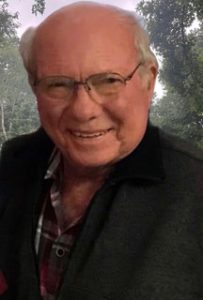 Bert “Brian” Ashley, age 83, Correctionville, passed from this life to the next on Wednesday, August 10, 2022 at his home of rural Correctionville. After a long fight for health, Brian went peacefully in his home, as he would have wanted.

A funeral service was held on Monday, August 15, 2022 at 10:30 AM at the United Methodist Church of Anthon with the Lay Pastor Shirley Nelson and the Rev. Todd R. Schlitter officiating. Burial will be at the Oak Hill Cemetery of Anthon with military rites conducted by the American Legion McNiff Post #389 of Anthon.

Brian was born on July 5, 1939, in a Sioux City hospital, to Francis “Frank” Marion Ashley and Sylvia Marie (Paulsen) Ashley. Brian graduated from Anthon High School in 1957 and immediately enlisted into the Navy, where in service he traveled to Hong Kong and Japan. On June 11. 1961, Brian married the love of his life, Sheryl K. Hamann at Midway, Lutheran.

They were blessed with three children: Kami, Ken, and Tony.

Brian was a lifelong resident of “Ashley Acres”, his Century Farm in rural Correctionville. He worked that farm in partnership first with his father Frank, and later with his youngest son, Tony.

Brian was a farmer, cattleman, and an entrepreneur. He loved to work with his hands and spent time restoring Corvettes with his sons and later his grandson. Brian loved to restore antique gas pumps and was known to mark his land with his own rebuilt windmills.

He also built his beloved grandchildren and great-grandchildren a treehouse on his farm and enjoyed being there to support them in all their sporting and dancing events.

Brian had a passion for life which he shared with his wife, Sheryl – together they enjoyed 40 years of vacationing in Mexico, 3 years of wintering in Texas, and of course their date night every Saturday night.

Brian was an active member of Anthon UMC, and currently of Wesley UMC of Sioux City. Brian was a constant support of his wife’s pastoral ministry.

He served as Worshipful Master of the Masonic Lodge of Anthon, was on the Anthon-Oto School Board for several years and was a member of the Anthon Legion #389.

Brian was preceded in death by his parents, Frank and Sylvia Ashley; a sister at birth, Janice Ashley; a sister, Sonia Chasteen; as well as his in-laws, John and LaVerna Hamann.