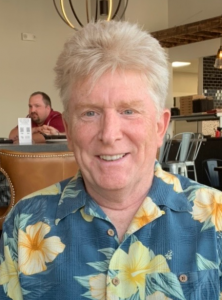 A funeral service will be held on Saturday, August 20, 2022 at 10:00 AM at the Nicklas D. Jensen Funeral Home of Moville with the Fr. Randy L. Schon officiating. There will be no visitation or burial.

Mark G. Ricard was born April 5, 1957 to Verdna Jane (Powell) and Joseph Charles Ricard, Jr. in Sioux City, Iowa. He graduated from West High School in Sioux City in 1975. Mark grew up on the west side of Sioux City in a great neighborhood full of kids and made many great memories there.

Mark was united in marriage to Karen Duffy at St. John’s Catholic Church on July 26, 1991 in Pender, NE. To this union two children were born, Austin Curtis and Amanda Rene´. Mark and Karen raised their family in Moville.

Mark’s first car was a station wagon that he bought from his brother, Joe. That started his love of buying and selling cars. Mark ran dirt bike races and earned a trophy at Castana Moto Cross in open class in 1975. He was proud of the Bultaco motorcycle that he recently restored.

There wasn’t much that Mark couldn’t fix, from clocks to appliances. He had fun with the challenge to make things better or to work again. Mark and Karen bought their first home in Moville in 1994. The day the moved in was the hottest day of the year. They owned a rental house next door and Mark’s brother Mike helped plan and install new plumbing and new duct work.

Mark was very much into music, stereo systems, records and even reel to reel equipment. Movies also interested him, watching Young Frankenstein seven times in the theatre and Blazing Saddles at least three times!

He was a member of the Immaculate Conception Church in Moville and was an active Knights of Columbus member.

Mark’s legacy is truly his children. Austin and Amanda were his pride and joy.

He was preceded in death by his parents, niece Jane Vogel Ricard, and nephew Michel Ricard.