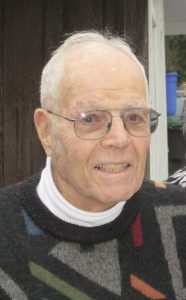 A funeral service will be held on Wednesday, August 31, 2022 at 10:30 AM at the United Methodist Church of Moville with the Rev. Sheryl K. Ashley officiating. Private family burial will be at the Arlington Cemetery of Moville with military rites conducted by the American Legion Wink-Sparks Post #303 of Moville.

Earl Edward Maxwell was born in 1924 in Galesburg, Illinois where he received the nickname Squirt at an early age. He graduated from high school in Galesburg, Illinois in 1942. He received his DVM in 1949 from Iowa State College, now Iowa State University, during two segments of college. As with so many of his generation, World War II interrupted schooling when he served for our country. He was a member of Beta Theta Pi for 80 years.

Doc met his soul mate, Helen Louise Logan in Ames, Iowa while both were attending college. Helen was from Moville, Iowa and received her Child Development degree from Iowa State College in 1949. Helen and Doc married on April 14, 1951 in Moville, Iowa and celebrated their 71st anniversary this year. They lived in Elmwood, Illinois for two years where Doc practiced veterinary medicine and Helen worked at the Farmers State Bank.

Doc and Helen moved to Moville in 1953, founded his veterinary practice and started Maxwell Farms. One of their North farms was part of the Louisiana Purchase in 1860 and Iowa State University’s land-grant legacy. The veterinary practice had the same phone number for 70 years and Doc was one of the oldest practicing veterinarians in Iowa for a time. Three boys and one girl were born to the Maxwells: Stee, Chantry, Tad, and Reed.

Doc and Helen made sure the family enjoyed sports, Scouting, with all three boys attaining the Eagle Scout Award and Chantry attaining high ratings in Girl Scouts. Church, pets, camping, traveling and entertaining foreign visitors were some of their hobbies. The whole family helped in the veterinary practice and on the farms, starting at a very young age. Repurpose, reduce and recycle was instilled in Doc as a way of life, garnered from growing up through the depression which he imparted to his children. Doc always had the family improve the area wherever they went; picking up litter and debris left behind by others and enhancing the area as needed.

Helen and Doc always had an interest in traveling, in order to broaden their worldview and experience other cultures. They traveled extensively throughout the United States and the world, visiting all 50 states and 125 countries. Doc was a voracious reader, a dedicated athlete, downhill skiing in Colorado into his late 80’s, golfing into his 90’s and was always on the go.

In lieu of flowers, memorials may be given to United Methodist Church of Moville, Moville Medical Clinic Fund, the Masonic Lodge of Moville #532 or St. Croix Hospice to help others.