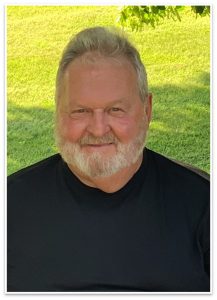 Lonnie Allen Fitch, the son of Stanley and Betty (Schumacher) Fitch, was born on December 3, 1948, in Sioux City, Iowa. He grew up on the family farm north of Correctionville, Iowa, and received his education in the Correctionville School District.

On November 12, 1966, Lonnie married the love of his life Jeanette Beeson in Dakota City, Nebraska. The couple settled on the family farm north of Correctionville and they were blessed with four children: Sherri, Michele, Ginger, and Shannon.

Lonnie worked in construction before starting his career with Woodbury County in road maintenance, where he was a dedicated employee for 29 years. Lonnie enjoyed a scenic ride on his motorcycle, belting out a country tune, spit shining his vehicles, collecting John Deere die-cast models, and tending to his lawn.

A devoted husband, father, grandfather, great-grandfather, brother, son, and uncle; Lonnie took the meaning of family to another level. He cherished every moment teaching, spoiling, and loving his wife, children, grandchildren and great grandchildren. There was nothing he wouldn’t do to see a smile on their faces. Lonnie made sure to always remind them “I have the nicest kids and grandkids…All such sweeties”.

Those who had the privilege to know Lonnie knew how his laughter could fill a room. His quick wit, sense of humor, and smile were contagious. He was faithful to his family and friends always willing to lend a helping hand. When the couple moved to town, you may have spotted him on his bench in front of his house watching cars or even stopped a while to just sit and shoot the breeze.