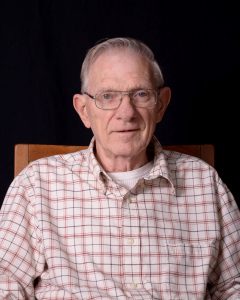 A funeral service was held at 10:00 a.m., Tuesday, August 23, 2022, at the St. Paul Lutheran Church of Ida Grove, Iowa. Rev. Richard A. Salcido officiated. Committal Services followed in the Sacred Heart Catholic Cemetery of Ida Grove, Iowa. The Christensen-Van Houten Funeral Home of Ida Grove, Iowa, is in charge of the funeral arrangements. Condolences may be sent online at www.christensenvanhouten.com

Merle Edward Schumann, the ninth of ten children of William and Clara (Eichorn) Schumann, was born February 12, 1937, in Anthon, Iowa. Merle attended a country school and helped on the family farm.

During retirement Merle got tired of relaxing and took on the responsibility of mowing and caring for the grounds at the Ida Grove Cemetery. Merle worked there for four years before he finally gave up to full retirement at 79 years of age.

Merle enjoyed playing cards with family and friends. One of Merle’s favorite pastimes was going to tractor pulls. He also enjoyed music so much that you would find him out at some establishment where music and dancing was a part of his and Clarissa’s (Boots) evenings. You would find Merle and Boots dancing to the band “The Next of Kin”, relatives of theirs, anytime they were playing in the area. Merle was a devoted member of St. Paul Lutheran Church in Ida Grove, Iowa.

He was preceded in death by his parents William and Clara Schumann; siblings Wilfred, Marvin, Orville, John, Ronnie, Dellav, and Violetta.