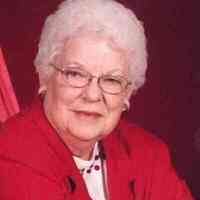 Shirley Ann Moriston, 87 of Anthon, Iowa went home to be with her Lord and Savior on Sunday, August 7, 2022, after a two-year struggle with cancer.

Services were held at 10:00am Wednesday, August 10th, at the Waterbury Funeral Service of Sioux City, 4125 Orleans Avenue, with Darla Baird officiating.

Shirley was born on February 10, 1935, to Helena and Theodore Johnson in Tripp, South Dakota. After the passing of Theodore, Helena moved her family to Sioux City, Iowa. That is where Shirley met her husband James of 55 years. Shirley attended Central High School.

Once Darla started school, Shirley volunteered as a room mother for the PTA. Shirley also drove for Head Start. After Dustin was born, Shirley worked at a bread store where she enjoyed decorating cakes. Shirley was “sharp as a tack” and enjoyed solving crossword and Sudoku puzzles. Shirley also served on her Joy Fellowship group from church.

She volunteered at the Goodwill’s Treasure Chest. Shirley was a 50-year member of various TOPS clubs.

In 2020 she finally reached her KOPS status AND was the Queen of Iowa. She also enjoyed Bible study and was a long-time member of the Church of All Nations.
Shirley is survived by: her brother, Jimmy (Penny) of Wisconsin; sister, JoAnn of North Carolina; step-sister, Marilyn (Larry) of Iowa; daughter, Darla (Timothy) of Anthon, Iowa; son, Dustin and girlfriend Leslie of Sioux Rapids, Iowa and daughter-in-law, Shari of Royal, Iowa; 5 grandchildren: Joshua Baird of Illinois; Sarah(Josh) Tillman of Nebraska; and DustiLyn, Cooper, and Serenity Moriston of Iowa; 9 great-grandkids, several nieces and nephews and many other extended family members and friends.

A big thank-you goes out to Hospice of Siouxland, Waterbury Funeral home and everyone in attendance today.