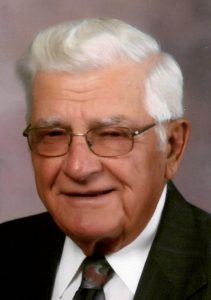 Dale Francis Murray, the son of Edwin Lawrence and Cora Catherine (Neihus) Murray, was born on April 15th, 1927, in Kingsley, Iowa. He attended the local country school at the elementary level just North of his home outside of Kingsley. He completed his High School education, also in Kingsley.

Dale was a World War II Veteran, joining the United States Navy at the age of 17. He completed boot camp at the Great Lakes in MI, then shipped out to Yokosuka, Japan for 10 months. Dale’s unit was held in Tokyo Bay for the signing of the Peace Treaty between the United States and Japan, before starting his assignment as Master at Arms of the Galley. Dale became a 75-year member of the American Legion in 2022 and was the American Legion Commander of Nash Post # 140 in 2000-2002.

Dale believed in community contribution and supported the Kingsley area in many ways: He drove friends to the Cancer Center for treatment, to Doctor’s appointments, and to church; Kingsley Volunteer Fire Department, 45 years – Chief from 1981-1987 and participated in the Firemen’s Water Races many times; Kingsley Ambulance Transport volunteer driver; Kingsley Citizen of the Year in 2008; Grand Marshall of the Kingsley Quasquicentennial parade; Sweetheart King at Kingsley Specialty Care Center in 2020; and the Smile Contest Winner at Kingsley Specialty Care Center in 2022.

Dale then started a gravel trucking business in 1949, moved into Livestock trucking in 1951, formed Murray & McDermott Trucking in 1955, joined DX Tank Wagon distribution in 1970, and Murray Oil Company with his son Dan in 1978, and always worked to help at the farm in any way he could.

On April 16, 1948, Dale was united in marriage to Betty Treptow. They welcomed five children (Daniel, Debra, David, Dawn, and Darci). He loved his kids, grandkids, and GGKids. Despite having the nickname “the Ole Bull of the Woods” he would join in neighborhood basketball games, kickball and family farm softball games. He loved dancing with Betty. Dale enjoyed playing euchre, pinochle, and cribbage with Sister Janet. He loved mowing and trimming, even the road ditches; working with cattle; doing anything at the farm, and watching any of his kid’s sports. He made many a root beer float for the family.

Dale and Betty were members of Saint Michael’s Catholic Church, and he was a 4th Degree Knight of the Knights of Columbus. His faith life was extremely important to him. He attended Mass, even using a tractor to get there once during a snowstorm. In later years, he became a “senior” alter server for daily Mass and made life-long friends with many of the Priests he served. He enjoyed delivering Meals on Wheels. Dale’s priorities could be summed up easily – Faith, Family, Friends & Farm. He passed many valuable lessons from these priorities on to his family.