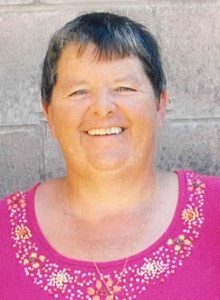 Debbie L. Carter Patterson, 64 of Moville, Iowa passed away peacefully Friday, August 26, 2022, at her home, with her husband and family at her side.

Celebration of Life will be held on Friday, September 2 at the Main Street Park in Moville Iowa with a prayer service at 10:30a.m., followed by a fellowship luncheon. Burial will be held at Arlington Cemetery, Moville, Iowa with immediate family directly following her prayer service. Family will join the fellowship immediately after. Arrangements are under the direction of Waterbury Funeral Service of Sioux City.

Deb was born on October 20, 1957, in Colorado Springs, Colorado to Carroll and Wanda (Carter) Koch. She grew up in Moville, Iowa graduating from Woodbury Central in 1976.

Debbie was an amazing woman, who always put others before herself. She was many things to many people, but some of her special gifts included gardening, flowers, cooking from scratch, collecting, decorating for the holidays, and many other things.

She worked in many positions through the years, in which all of them involved being a friendly smiling face in the public and helping to serve others in any way she could. Being a caregiver to all was her specialty; if needed she was there.

She loved spending time with her family especially her husband, children, grands, siblings, and her friends, playing cards, and having many long talks and conversations with those that were close to her from every direction for miles.

On October 20, 2019, Deb married her long-time love Paul Patterson at their home in Moville, Iowa.

She began her two plus year battle with cancer shortly after their union and began the fight of a lifetime. She never once complained and never gave up. She lived each day with patience, hope and love. And she finally won.

Deb is preceded in death by her parents and her son, Derek William Rahn.