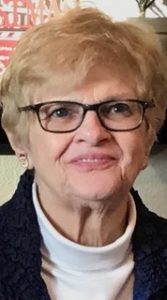 Gayle D. Jacobs was born May 21, 1945 in Sioux City, Iowa to Kenneth and Shirley (Green) Goodmanson. She graduated from Eastwood High School.

Gayle was united in marriage to John R. Jacobs, Sr. on January 9, 1962 at the Evangelical United Brethren Church Correctionville. To this union four children were born. Gayle loved John with all of her heart. She was a loving wife and took her role as a wife to heart. Gayle took care of John for 59 years; she definitely stood by her man. She dearly missed him after his passing on February 9, 2021.

Gayle worked for the Eastwood, then River Valley School District for 30 years, retiring in 2007. She made a huge impression on many students, staff and parents working at the school through the years. She took her position seriously and helped many along the way, but she also had lots of fun.

Gayle was always looking for ways to improve the school district and helped make great strides to better the district as well as the town of Correctionville.

Gayle was a member of Grace Lutheran Church. When her sons were younger she was a Boy Scout leader. Her hobbies included gardening, listening to the “oldies,” trips to the casino with John and finding a winery to enjoy a glass of wine. Gayle loved spending time with her children, grandchildren and great-grandchildren. Cooking was something she enjoyed and she was always up to making a “free meal” for any family or friends who showed up to the house.

Holidays were so precious to Gayle; she looked forward to the decorating and preparing delicious meals. Even if not all of the family could celebrate with her, she never complained. Gayle’s friends were near and dear to her. She didn’t know a stranger and was so kind to everyone she met.