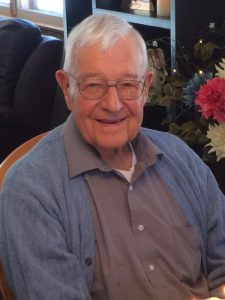 Marvin J. Wycoff, age 93, of Moville, passed away on Sunday, August 28, 2022 at the Good Samaritan Society of LeMars. He will be remembered as a loving spouse, father, grandfather, and great-grandfather.

Marvin was born on February 1, 1929, to Oscar and Fern (Manz) Wycoff in Sioux City, Iowa. He lived and grew up around Merrill, Iowa.

Marvin proudly served his country in the Army during the Korean War. He returned to the US and promptly purchased a Harley-Davidson motorcycle and headed to California. He married Mildred (Millie) Frances Yockey on October 5, 1955. Their union was blessed with three children: John, Dan, and Geri.

Marvin was a farmer for many years and had a passion fordairy farming. He became a USDA meat inspector until his retirement. He and Millie lived most of their lives in and around Moville. In 2015 they moved to Whispering CreekSenior Living and then Marvin spent his last few months in Le Mars.

He was a long-standing member of the Immaculate Conception Catholic Church. He was active with the church and the Knights of Columbus.

He served as the Grand Knight several times. He assisted in many local activities with the Moville Senior Center, various church functions and the Boy Scouts of America. He was instrumental in developing the Moville Emergency Medical Service. He was proud of his role in supporting and improving the Immaculate Conception CountyFair Stand and served as a janitor for the parish.

Marvin was a quiet and humble man of few words but had a smile that would light up a room. He always gave a friendly nod to everyone he met. He enjoyed woodworking and loved the outdoors. He spent many weeks camping, fishing, and canoeing in the boundary waters between Minnesota and Canada and believed this was indeed heaven.