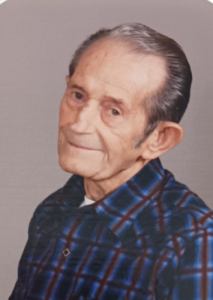 Donald Leroy Whitesell was born January 4, 1932 in Correctionville, Iowa to Roscoe and May (Mizer) Whitesell. He graduated from Correctionville High School in 1951.  After high school he joined the U.S. Navy and earned the rank of Seaman serving in the Korean War. Upon returning home from the Navy he began farming in Correctionville and Anthon.  He farmed until 1965 when he and his family moved to California and he began working as a fabricator with fiberglass for Thunderbird and Douglas Aircraft.  He retired from Aerojet/Rocketdyne in 1993.

Donald was united in marriage to Lois Wright on December 26, 1951. To this union four children were born: Deb, Jim, Rick and Sherrie. After the death of Lois in 2003, Donald moved back to Correctionville.

He was a member of Grace United Methodist Church of Correctionville and the Calvary Baptist Church while he was living in Woodland, CA. Donald was a master at growing roses and was a collector of coins and guns.  His Chevy Camaro was his luxury and his amusement during his later years.  In his earlier adult years he enjoyed doing macrame and also woodworking, making many items for his children and grandchildren.  Sitting and listening to Bluegrass and old country music was a favorite pastime of his. Donald was an avid San Francisco 49er fan.  Family was very important to Donald and he enjoyed attending his grandchildren’s sporting and school events throughout the years.

He was preceded in death by his wife of 52 years, Lois; parents, Roscoe and May Whitesell; brother, Ray Whitesell; granddaughter, Lindsey Whitesell and great-grandson, Peyton.