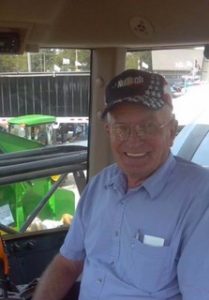 Franklin E. Huth, age 82, of Cherokee, formerly of Washta, passed away peacefully on Thursday, September 22, 2022 at The Gardens Assisted Living of Cherokee.

A funeral service was held on Monday, September 26, 2022 at 10:30 AM at the St. John Lutheran Church of Cushing with the Pastor Jody Still Herbold and the Pastor Barb Dinelli officiating. Burial will be at the Holstein Cemetery of Holstein with military rites conducted by the American Legion Mumford-Moon Post #79 and VFW Sioux Valley Post #1750 of Correctionville. A visitation was held on Sunday, September 25, 2022 from 4:00 PM – 7:00 PM at the Nicklas D. Jensen Funeral Home of Holstein. The Nicklas D. Jensen Funeral Home of Holstein is in charge of the arrangements.

Frank was born September 21, 1940 at the family farm to Carl and Bertha (Miller) Huth. He was baptized and confirmed at St. John’s Lutheran Church in rural Cushing, IA. He graduated from Washta Consolidated Schools in 1958 and was drafted into the US Army in July 1963 serving with the 124th Medical Detachment in Swibrooken, Germany.

In 1965, Frank returned to farm with his parents.

On March 4, 1967 he was united in marriage to Beverly Livermore at St. John’s Lutheran Church in Cushing, IA and made their home on the family farm where they had two sons, Paul and Matt.

Frank and Beverly kept very busy with the daily farm activities with the livestock and crops. Frank served as a 4-H Leader for the “Douglas Doers” 4-H Club for 23 years watching the youth excel with the projects and successful futures. He also served on the Ida County 4-H Committee for four years.

Frank and Beverly farmed until the fall of 2009 when they retired due to Beverly’s health. Frank was a dedicated caregiver until the passing of Beverly on September 10, 2011.

Frank enjoyed having lunch at McDonalds in Cherokee where he loved visiting with friends new and old.

In later years, he enjoyed visiting with the various nurses and health professionals finding their connection to people he knew in the area.