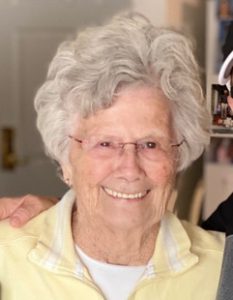 Leone M. McElrath, age 91, of Moville, passed away on Monday, September 19, 2022 at the UnityPoint Health-St. Luke’s of Sioux City.

She was united in marriage to Lyle McElrath on December 31, 1949 in Moville, Iowa. Five children were born to this union: Craig, Sue, Steve, Lori and Julie.

After raising her children she worked as an aide at Woodbury Central School, was an OB-Tech at St. Luke’s Hospital from 1980 to 1994, then worked at Mid-Step Services in Moville from 1994 to 2000.

Lee enjoyed golfing and was a Meadows charter member. She also liked playing Bridge and Euchre. She was a member of the United Methodist Church of Moville and was a volunteer for Hospice. Lee loved spending time with family and watching her grandchildren’s sporting events and Iowa basketball.