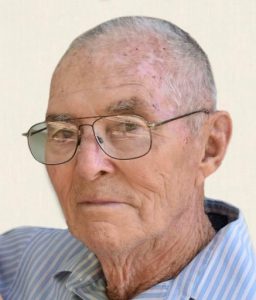 Daniel Ray Clark, 87, lifelong resident of Correctionville, Iowa, passed away peacefully on September 24, 2022 with his wife of 68 years and his three children by his side. In his last three days he was also visited by or spoke with every one of his grandchildren.

Danny requested there be no funeral service. Meyer Brothers Morningside Chapel is assisting the family. Online condolences may be made to www.meyerbroschapels.com. He will be interred at Correctionville Cemetery.

Danny was born on December 19, 1934 in Correctionville to Ray and Alta P. (Baker) Clark and graduated from Correctionville High School in the Class of 1953. He married his eighth-grade sweetheart and high-school classmate, Alta J. Fitch, on July 18, 1954.

Danny began his work life as an employee of Jersey Ice Cream company. He and his father took over that business, renaming it Clark’s Jersey Ice Cream company, which processed and delivered milk and dairy products in the Correctionville area. Later, the business transitioned to Clark’s meat locker. After closing the company, Danny and his father stayed in business together as the owner/operators of Clark’s IGA grocery store.

Upon his father’s retirement, they sold the grocery store and Danny began working maintenance for the City of Correctionville. In 1976, he again became a small-business owner by establishing Dan Clark Construction company, which he operated successfully until 1987. From then until his retirement in 1998, he again served Correctionville as the City Clerk and Administrator.

Danny served his community as a volunteer fireman, high-school athletic official (football, basketball, and volleyball), and as Mayor of Correctionville from 1966-73 and again from 1980-86. Working side-by-side together as they nearly always did, he and Alta helped establish the Van Houten Roadside Park.

Danny lent his professional handyman skills to help on countless projects and repairs for friends, family, and anyone in need. He never turned down a request for help or shied away from a difficult or dirty job.

In retirement, he became an avid winemaker and freely shared his best efforts, often with friends and family gathering on his front porch. He and Alta wintered over at the Acacia RV Park in Donna, Texas for 20 years, enjoying a circle of friends and continuing the projects and handiwork for which he was known. He was dearly loved and will be sorely missed.

He was preceded in death by his parents, his younger sister Ruth (Clark) Graybill and an infant son, Calvin Dean.