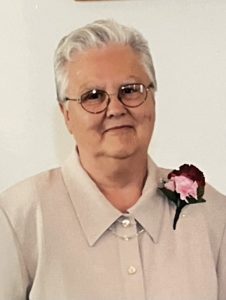 A funeral Mass was held on Friday, September 30, 2022 at 10:30 AM at the Immaculate Conception Church of Moville with the Fr. Randy L. Schon officiating. Burial will be at the Mount Saint Joseph’s Cemetery of Anthon. A visitation was held one hour prior to the service starting at 9:30 AM at the church. The Nicklas D. Jensen Funeral Home of Moville is in charge of the arrangements. Online condolences can be made at nicklasdjensenfh.com.

Evelyn Irene Ketelsen was born December 18, 1927 at the Sioux City Maternity Hospital to Bernard and Lena (Deming) Meyer. She was raised on a farm in Anthon, Iowa and attended school at Climbing Hill and Anthon. She graduated Anthon High School in 1945.

Evelyn was united in marriage to Laurence “Chris” Ketelsen on October 17, 1946 in Anthon. To this union five children were born.

Evelyn was a hard working woman, something she learned early in life growing up on the farm. She was a homemaker and farm wife and was also a custodian in the Bronson School District in addition to working at Marion Hospital for a number of years.

She was a member of the Immaculate Conception Church in Moville and the American Legion Auxiliary McNiff Post #389. She kept a big garden and canned much of her family’s food. Evelyn enjoyed doing fill in puzzle books daily, coffee get-togethers at the Friendship Center in Lawton and spending time with family.