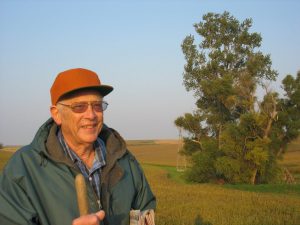 A Memorial Service will be held at 10:30 a.m., Friday, October 7, 2022, at the United Methodist Church of Anthon, Iowa. Lay Speaker Shirley Nelson will officiate. Committal services will follow in the Rock Branch Cemetery of rural Correctionville, Iowa, with Military Rites conducted by the McNiff Post No. 389 of the American Legion, of Anthon, Iowa.

A Visitation will be held from 6:00 p.m. to 8:00 p.m., on Thursday, October 6, 2022, with a Prayer Service at 8:00 p.m., at the United Methodist Church of Anthon, Iowa. The Armstrong – Van Houten Funeral Home of Anthon, Iowa is in charge of the funeral arrangements. Condolences may be sent online to www.armstrongfuneral.com.

On November 1, 1953, Kenneth was married to Phyllis Anderson. They celebrated 61 years together and were blessed with an abundance of family and friends. Phyllis passed away on June 14, 2015.

Kenneth was a longtime member of the United Methodist Church of Anthon. He began working in the fields as a young boy with his father and brothers. Kenneth farmed for over 60 years, first east of Anthon, then near Moville, Iowa. He served his country in the United States Army and was honorably discharged.

Kenneth was also a talented woodworker and could often be found in his workshop making things for family and friends.