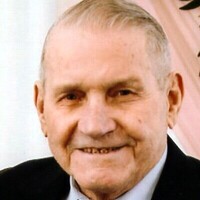 Dick was born February 23, 1938, in Kingsley, IA, the son of Alvin and Elvera (Lindgren) Plendl. He grew up in the Kingsley area graduating from Union High School in 1957.

Following high school, he worked for Irving Jensen, and then entered the US Army in 1962. After his honorable discharge he was united in marriage to Ramona Uhl on January 25, 1964.

After their marriage he trucked with Plendl Bros. He then started Richard Plendl Trucking and his CB handle was Polar Bear. Along with trucking, he farmed and raised hogs. Farming was his first passion; his second was fishing.

Dick and Ramona spent many summer days fishing in South Dakota. Dick was also an avid Hawkeye fan, rarely missing a game. Dick was a member of St. Michael Catholic Church of Kingsley. Dick treasured spending time with his family from his children and their spouses and his grandchildren.

Dick was preceded in death by his parents, Alvin and Elvera; his parents-in-law, Lester and Gertrude; and a nephew, Dee Jay Davison.