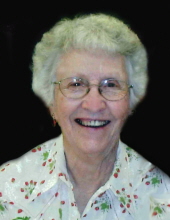 Gladys Opal was born April 21, 1926, on a farm near Correctionville, Iowa, the daughter of Oscar and Augusta (Petersen) Wright. She attended country school then graduated from Battle Creek High School in 1944. On January 29, 1944, Gladys was united in marriage to Thomas Leesley, Jr.

After the war the family moved to Oto, Iowa, where they farmed until Tom’s death in 1981. Gladys married Donald Crawford on July 1, 1983.

Gladys enjoyed farming, gardening, and raising farm animals; always happiest when she was outside. She was an enthusiastic farm wife who drove trucks and tractors, along with whatever else needed to be done. Preparing large Sunday family dinners was an important part of her week.

Gladys was a member of the Oto United Church of Christ and the Mite Society, along with the American Legion Auxiliary of Oto.

She was an avid card player and played whenever she had the opportunity. In retirement she played pool in a senior league, winning The Senior Ladies’ Olympic Championship. In later years Gladys and Don traveled to Scotland.