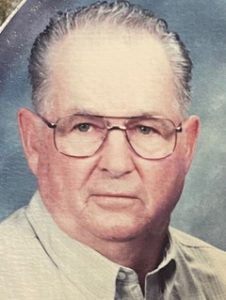 A funeral service was held on Tuesday, October 25, 2022 at 11:00 AM at the First United Methodist Church of Cushing with the Pastor Jon Montgomery officiating.  Burial will be at the Arlington Cemetery of Moville.  A visitation was held on Monday, October 24, 2022 from 5:00 PM – 7:00 PM at the Nicklas D. Jensen Funeral Home of Correctionville.

Duane Eugene Lau was born May 6, 1932 to Lucille Lau in Moville, Iowa. After high school he joined the U.S. Navy and spent four years aboard the USS Badoeng Strait during the Korean War. After being discharged from the service he started work lugging beef at the packing house.

Duane was united in marriage to Beth Steffe on June 6, 1954. They moved to a farm in Correctionville in 1972 and started a dairy herd. They sold the dairy herd in 1981. Duane and Beth retired to Cushing in 2007.

He was preceded in death by his mother, Lucille; step-father, Leonard Uhl; sister, Delores and brothers, Derick and Dan.