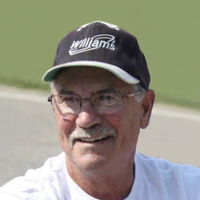 Doug was born the son of Norman and Ethel (Decker) Williams on November 9, 1947 in Newark, New Jersey. The family moved to Iowa in 1949. He graduated from Terril High School in 1965.

Doug was drafted into the 82nd Airborne Division of the United States Army on September 26, 1967. He received the Good Conduct Medal and a Purple Heart commendation medal for heroism during his service in Vietnam.

He was honorably discharged on September 1, 1973 and returned to Bronson, Iowa which would become his lifelong home. He met JoAnn Krueger in 1973 and they were married on January 19, 1974.

As a lifelong resident of Bronson, he served on the City Council for many years and also helped as a real estate developer in town. Doug and JoAnn also served as Parade Marshals for the Bronson Fourth of July Parade in 2021.

Doug enjoyed many things. He liked playing golf, pool, euchre, and horseshoes. He also liked to hunt, fish, and garden. He was a devoted Vikings fan and MOPAR enthusiast. He had a number of cars that he liked to work on and even did some drag racing. He found great joy in attending his grandchildren’s sporting events and spending time with his family and friends at his pool.

He was preceded in death by his parents; father and mother-in-law, Ruth and Karl “Pete” Krueger; brothers-in-law, Charles Coe and Gene Krueger; and niece, Miranda Jensen.