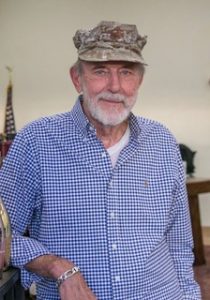 Reinhold (Ray) Hoffmann, 78, of Correctionville, Iowa, passed away at MercyOne Siouxland Medical Center in Sioux City on October 29th, 2022. Ray put his faith and trust in Jesus Christ, loving God and his family, who were with him at bedside.

Ray was born in war-ravaged Germany, on April 14th, 1944, eldest son of Johann and Johanna Hoffmann. Emigrating to America in 1959, he became a citizen shortly thereafter and lived life in pursuit of the American dream, never considering himself a hyphenated American, always proud and ever faithful.

Though he graduated from Linden High School in Germany, he studied English at Maury High School in Norfolk, Virginia in 1960. He then enlisted in the U.S. Marine Corps, completing bootcamp at the legendary Paris Island. He served with distinction, and that service spawned a lifelong brotherhood and countless colorful stories. While stationed in Virginia as a reservist, he worked as a brew master at Champale, managed a Roy Rogers restaurant and played semi-professional soccer.

Life changed dramatically when he became a husband and father, and it was the love and adoration of his wife Kathleen that would prove to be the driving force and purpose of his life, even shaping his faith. He and Kathleen were married in Norfolk, Virginia.

Ray and Kathleen were best friends, constant companions and cheerleaders for one another through more than 50 years of hills and valleys, trials and triumphs. Together, they raised a family, worshipped faithfully, traveled extensively, restored homes and started businesses, never losing faith or confidence in God and each other.

They moved to Anthon, Iowa, in 1972 to raise their kids in an idyllic Midwestern small town. To his children, he was a bold, strong man with countless talents, and he shared many lessons through their childhood, though some may have felt like a long-lost episode of the Berenstain Bears.

Among those lessons were kick-starting a bonfire with a cup of gasoline, testing household electrical circuits with a flat blade screwdriver and skillfully catapulting ass over apple cart on a four-wheeler. Over the years, he was a pilot, part-time sky diver, whistling belly-flopper and full-time showoff.

Professionally, Mr. Hoffmann was well-known for his entrepreneurial spirit and incomparable work ethic. The long list of businesses he started includes Hoffmann Cloverfarm Grocery, Bonded European Auto Imports and Luciano’s Italian Restaurant, all made successful by sheer force of will and frequent 14-hour workdays. He also owned the Uncorked wine shop and hosted the wine club weekly for many years.

For two decades, he worked as a stockbroker for firms in Sioux City and Omaha. In the meantime, he served as State Chairman of the Iowa Republican Party, working tirelessly for campaigns while forming lifelong friendships with presidential candidates from Bob Dole to Newt Gingrich. His last campaign was for his beloved wife, elected mayor of their hometown, Correctionville.

Drawing from his professional career, he was the first soccer coach of Morningside College, training and mentoring many young men and serving as a state-wide soccer referee. He served in the Knights of Columbus, founded a Lions Club chapter, served as president of the Castle on the Hill Association and led efforts to revitalize Historic 4th Street. He always prioritized faith and spiritual growth, serving in many churches and hosted a weekly prayer group.

Reinhold (Ray) Hoffmann was preceded in death by his parents and two brothers, Werner and George.

He is survived by his wife, Kathleen, sons Brent and Eric (Jennifer), daughter Heather (Lucio), a brother, John (Mina), and two sisters, Ursula (Candy) and Eva (Gary). His beloved grandchildren are Amanda (Ry), Abigail (Ross), Amelia (Will), Antonio, Silas, Adrian and Lydia. Ray’s memory will live on in the hearts of his family.