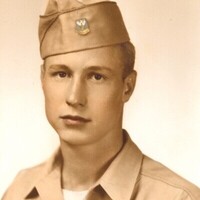 Alfred “Swede” Larsen, 95 of Hornick, Iowa passed away Sunday, November 27, 2022, at a hospital in Onawa, Iowa, surrounded by his family.

Graveside services were held 10:30am Friday, December 2, 2022, at the Westfork Township Cemetery in Climbing Hill. Military Honors will be provided by the United States Army and American Legion Post 492. Arrangements are under the direction of Waterbury Funeral Service of Sergeant Bluff.

He farmed in Climbing Hill and worked for Knox Gelatin for a number of years. Swede enjoyed kidding with family, friends and strangers.

He is survived by his two sons: Jeff (Connie) Larsen, Kevin Larsen both of Sioux City, Iowa five grandchildren, and seven great grandchildren.
Swede is preceded in death by his parents; his wife Barbara in 2018; five sisters, one in infancy; and one infant brother.