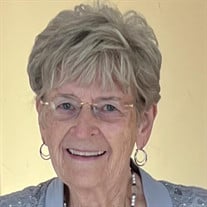 A Celebration of Shirley’s Life will be held in Spring 2023 in Correctionville, IA.

Arrangements are being handled by Shikany’s Bonita Funeral Home, Family Owned Since 1978.

In lieu of flowers, the family requests donations to be made in Shirley’s name to the ADPi chapter at KU at the following link: https://donate.alphadeltapi.org/CSiDonate/Give.aspx/HCN5NKSP#c

Shirley was born on April 5, 1942, to Theodore Roosevelt and Iona Maude (Mahin) Schumacher. She grew up in Correctionville, Iowa, graduating from Correctionville High School in 1960. Following high school, she attended college in Omaha and played professional basketball.

In 1964, Shirley married Gary Goodburn and they resided in Cushing, Iowa where they raised their family. She worked at Wilson Trailer Co. and as an Executive Secretary at McCracken Concrete Pipe & Machinery before operating Goodburn Construction with her husband.

In 2005, Shirley relocated to Florida to be closer to her daughters and grandchildren. In 2011, she began a second career serving as a House Director for Alpha Delta Pi Sorority at Kansas State University (2011-2013) and the University of Kansas (2013-2022). She retired in May 2022 and made her home in Estero, Florida.

Shirley (Gram, Golden Grams) had a huge heart and was one of the warmest people you’d ever meet. She was genuinely interested in the people she met and knew. She was the beloved “Mom Shirley” to hundreds of collegiate women who remember her as a kind, warm, and sweet soul.