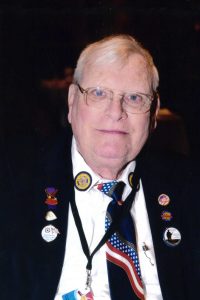 A memorial service will be 10:30 A.M. Thursday, December 15, 2022 at Hornick United Methodist Church in Hornick, Iowa with Pastor Catie Newman, officiating. A live stream of the service will be posted on the Goslar Funeral Home website with Ken’s obituary. Burial will follow in the Willow Township, rural Holly Springs, Iowa, with Military Honors provided by the United States Navy and Wink-Sparks American Legion Post #303 of Moville, Iowa.

Visitation will be one hour prior to the service Thursday, December 15, 2022, at the Hornick United Methodist Church, Hornick, Iowa. Arrangements are under the direction of Goslar Funeral Home and Monuments, Onawa, Iowa. Condolences may be left for the family at www.goslarfuneralhome.com

Kenneth Lee was born February 17, 1941, in Marshalltown, Iowa. He was adopted as a baby to Richard and Regina (Carlson) Berke. He attended grade school in Sioux City and graduated from East in Sioux City.

Ken served in the United States Navy from July 2, 1958 and was honorably discharged November 24, 1961. He was a member of Wink-Sparks American Legion Post #303 of Moville, Iowa.

Ken served as a past commander for the Lawton Post, Woodbury County, and the 9th District. He attended an honor flight to Washington, D.C.

Ken and Julie Roberts were married and two children were born to this union, Randall and Nicole.

Ken and Marilyn Bromander were married on April, 6, 1991 in Hornick, Iowa. He worked as a truck driver and electrician for many years. Ken enjoyed traveling, reading, roller skating, photography, and assembling models. Most of all he enjoyed his time with his family and capturing memories together.

Ken was an active member of the Hornick United Methodist Church.

He was preceded in death by his parents, Richard and Regina Berke; father-in-law, Ted Bromander; and brother-in-law, Charles Bromander; niece, Jennifer Thompson. In lieu of flowers, memorials in Ken’s memory may be made to a charity of your choice, or to the family for future designations.