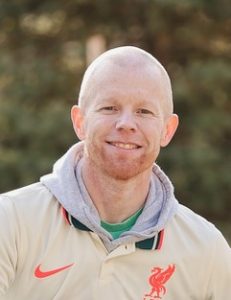 Matthew M. Byers, age 44, of Ankeny, formerly of Moville, passed away on Tuesday, December 6, 2022 at his home of Ankeny after courageously living with an aggressive cancer diagnosis.

Matthew was born on August 22, 1978 in Sioux City, Iowa to Michael and Rachelle (Shelly) Byers. He graduated from Woodbury Central High School, playing soccer for Sioux City Heelan, and went on to earn a computer science degree from Truman State University.

After playing with the Sioux Falls Spitfire, he remained in Sioux Falls beginning his software development career and coached both high school and club soccer. He later coached at CrossFit. Matthew always had a passion for exercise and living his personal best.

He followed a calling and joined the United States Army in 2012, later receiving an honorable medical discharge.

Enjoying spending time with his nephews he returned to Iowa, Matthew was passionate about Liverpool Football Club, Iowa Hawkeyes football and wrestling, his pups, Chicago Cubs, gaming and his friends. His fierce loyalty, wit and love will be missed by many.

Left to cherish his memory are his parents, Mike and Shelly Byers, sister Heather (Matt) Wahlberg and their boys Conor and Calen Wahlberg, his pups Opie and Ike, all of Ankeny, IA. Many aunts, uncles, cousins and close friends.

He was preceded in death by his grandparents, Bill and Millie Kisting, Paul and Katie Byers; aunts, Linda Weinert and Marcia Moore. In lieu of flowers, consider making memorial contributions to your favorite charities and doing something kind for someone.