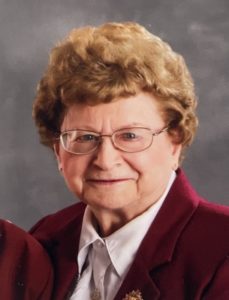 Wilma A. Hammer, age 96, of Arthur, passed away on Wednesday, December 7, 2022 at the Cherokee Regional Medical Center of Cherokee.

A funeral service was held on Saturday, December 10, 2022 at 11:00 AM at the Faith Lutheran Church of Holstein with the Rev. Scott L. Neumann officiating.  Burial will be at the Holstein Cemetery of Holstein.

Wilma was born on April 24, 1926, on a farm southwest of Holstein, Iowa, the fourth of seven children.  She was the daughter of Harry and Eva (Baumann) Heilman.

She attended country school (Battle Tounship #2) near Cushing, through the eighth grade.  In May, 1944 she graduated from Cushing High School.  Her first degree teaching certificate was attained at Buena Vista college. For the next four years she spent teaching at country schools.

On March 19, 1948, Wilma was united in marriage to Donald Hammer at Cushing to which they were blessed with three children, Rollie, Gary and Donna.  Don and Wilma farmed in Ida County near Holstein and Galva before purchasing their own farm near Arthur, Iowa, in 1958.

Wilma returned to college and received her BA degree in education at Buena Vista college.  With that degree she taught elementary grades at the Schleswig Elementary School from 1960 until her retirement in 1990.

Don and Wilma enjoyed their days working on the farm and then traveling when they could which created many friendships in other states and countries. They both had a love for dancing and spent many hours on the dance floor.

Wilma was a member of the Faith Lutheran Church in Holstein and cherished her friendship with the members there.