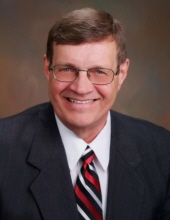 A Mass of Christian Burial was held at 10:30 a.m., with a Visitation held prior from 9:00 a.m. to 10:30 a.m., Saturday, December 10, 2022, at St. Joseph’s Catholic Church of Salix, Iowa. Father Michael J. Erpelding officiated. Military Rites were conducted by the George Nelson Post #662 of the American Legion of Sergeant Bluff, Iowa. Committal services followed in St. Mary’s Catholic Cemetery of Mapleton, Iowa.

Michael Robert “Mike” Clayton of Mapleton, Iowa, passed away suddenly on Sunday, December 4, 2022, at the age of 77 years and 3 days.

He was born on November 30, 1945, in Sioux City, Iowa, the son of Milo “Mike” Clayton and Gloria Grass. After his parents’ divorce, he lived in Mapleton with his grandparents, Harvey and Ann Grass. Mike graduated from Maple Valley High School in 1964.

Mike later served in the Iowa Air National Guard from 1977 to 1979 when he was honorably discharged. He was an active member of the American Legion Post #662 of Sergeant Bluff, Iowa.

On June 4, 1966, he married his high school sweetheart, Sharon Woodward, daughter of Everett and Mary Woodward, at the St. Mary’s Catholic Church in Mapleton. They celebrated 56 years of marriage this past June. To this union three sons were born: Darren, Carl and Steven.

Mike worked for Terra Industries near Sioux City following his discharge from the military, then spent many years with IPS, now Mid-American Energy. While working at Mid-American, Mike attended Briar Cliff University earning a Bachelor of Arts degree in Business Management.

He entered public service, working for Woodbury County, Iowa, for 20 years, starting in the motor vehicle department where he served as the Chief Deputy. Mike then ran for Woodbury County Treasurer and had served in that role for 10 years when he retired.

His greatest joy was serving as a Cub Scout leader, scout master, and soccer coach.

Mike was a Ham Radio enthusiast (KØXH) throughout his life, making contacts throughout the world. A close friend said of Mike, “He was always supportive and present. He always had a smile and a camera in hand too!”