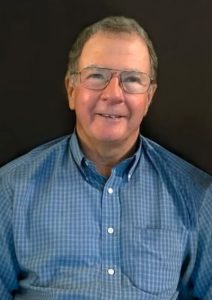 Scott grew up in Moville, IA, graduating from Woodbury Central High School in 1965 and then attended Iowa State University, graduating with a chemical engineering degree.

After graduating with a chemical engineering degree, he moved to San Francisco and began working for Bechtel Corporation, a global engineering and construction management company.

For 15 years, his work with Bechtel took him around the world to locations such as Korea, England, Abu Dhabi, Jakarta, and throughout North America. He eventually landed in Rosalia, Kansas in the summer of 1976, where he met Patricia Dill. They were married in January 1977.

Bechtel projects continued to take them around the United States and then to Venezuela, Canada, and Saudi Arabia. They welcomed their three daughters along the way.

While traveling across the Midwest between job sites in the early 1980s, Scott fell in love with the Ozarks and started making plans to raise his family in this community. In the mid-1980s, he left the world of construction engineering and began a rewarding career with the City of Lebanon, serving first as the City Engineer, later as City Administrator, and retiring as the Public Works Director in 2008.

Scott had a servant’s heart; he made serving his church and community a priority over the years. As a long-time member of the First United Methodist Church, Scott taught junior high Sunday school, contributed to several committees, led the finance team, and organized many local service projects.

Scott and Pat also traveled with the United Methodist NOMADS program, providing them an opportunity to combine their love of camping with their love of serving others. Scott was a founding member of the Lebanon Area Foundation Community Cares organization, which has donated millions of dollars to local nonprofit organizations that meet the needs of those in this community.

Scott was also a Rotarian and a volunteer with 4-H and a variety of other service organizations.

When at home, Scott enjoyed being in his vegetable garden, planning his next home project, cooling off in the backyard pool, and engaging with his grandkids and their interests. He was a life-long learner, always with a stack of non-fiction material at the ready.

He was preceded in death by his wife of 44 years, his brother Mark, and his parents.
Those who knew and loved Scott will miss him terribly, but know that he is whole and reunited with the love of his life.