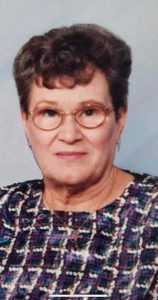 Joanne E. Preul, 88, of Moville, Iowa passed away on Saturday, December 17, 2022 at her residence surrounded by her family.

Joanne Evelyn was born September 3, 1934, in Salix, Iowa, the daughter of Joseph and Daisy (Cain) Lussier. She worked for IPS for many years.

Joanne and Wayne F. Preul were united in marriage November 19, 1953 in Sergeant Bluff, Iowa. To this union two children were born, Janine and Wade. The couple farmed in Monona, Plymouth and Woodbury counties. They farmed near Moville since 1970.

In 1975 Joanne became a Head Start teacher and worked at Woodbury County Community Action Agency until 2010. In her later years, she enjoyed spending time with her grandchildren and great-grandchildren.

She was preceded in death by her husband in 2009, Wayne Preul; parents, Joseph and Daisy (Cain) Lussier; daughter, Janine (Preul) Platzeck in 2015; and nephew, Dennis Lamoureaux.