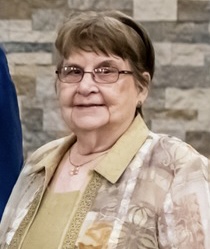 Beverly was born February 8, 1931 in Spencer, SD the daughter of Albert and Ione Dorothy (Horn) Adams. She graduated from Waterbury High School in 1949 and moved to Sioux City, Iowa and worked as a bookkeeper for Sioux City Optical. Beverly was united in marriage to Leo E. Hansen in 1952 and to this union two sons were born, James and Jeffrey.  Beverly was united in marriage to Edmer (Ed) Elgar Scheer in 1963 and to this union one son was born, Matthew. Ed and Bev moved to Moville, Iowa in 1985.

Beverly was very detailed and sharp, she spent most of her years working in bookkeeping and accounting. She enjoyed taking additional classes in accounting and tax. She worked at Western Contracting from the 1960’s to the 1980’s, Terra Corporation in the 1990’s, and retired from Cargill at the age of 77 in 2008.

Beverly maintained the books for her husband Ed’s business E&B Motors from the 1960’s until Ed’s passing in 2006. Beverly was involved in her church community, she enjoyed tending to her flowers and plants and she loved to follow the stock market.

As the oldest of eleven children: nine girls and two boys, Beverly’s door was always open. Over the years she gave assistance to all her siblings that needed it. Bev had a lot of living left to do, her son just finished her bathroom remodel and Bev had more house projects on the list that she wanted to enjoy.