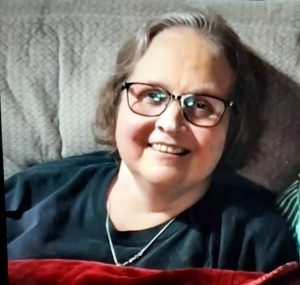 Kenne McKeever, 50 of Moville, Iowa passed away Tuesday, January 3, 2023 at a local hospital with a long hard battle of health issues, surrounded by her family.

Services were held January 10, 2023, at the Waterbury Funeral Service of Sioux City.

Kenne Valerie McKeever was born July 14, 1972, in Sioux City, Iowa to Raymond and Linda (Henke) Kashas. She was a special person who loved birds, nature, and hiking.

She met Gene McKeever many years ago and then they lost touch. They became reacquainted one night when Gene worked late and stopped to grab a beverage. Little did he know, a blast from the past was waiting there to sweep him off his feet! They had their first date a week later at Hungry’s Steakhouse in Dakota City and were inseparable ever since, marrying September 13, 2008. They added a few fur babies to their family over the years: Snooker, Echo, Junior, Ace and Skeeter.

Kenne was a diligent worker, retiring from Liteforms in August 2016 due to health issues. She was a member of the Audubon Society (bird watching), Sioux City Rock and Gem Club, and was a part of the Master Gardners organization for a time.

Kenne is survived by her loving husband Gene; her fur babies, Ace and Skeeter; her parents; her brother Roger Ahrens; her sisters Dawn (Jerry Meister) Hoyt and Deanna (Rick) Guy; her nephews Matthew Kashas and Joseph Ahrens; her nieces Amanda Blomenkamp and Andie Guy; her great nephews Adlee and Kit Blomenkamp; and her in-laws Robert and Coleen McKeever.

She is preceded in death by her grandparents Kazmer Kashas, Shirley (Richard) Huofek, Alice and Kenneth Henke, her Uncle Charles James Kashas, and her loved fur babies Snooker, Echo, and Junior.