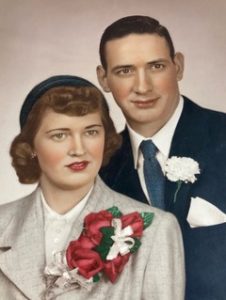 Mary A. Shever, age 88, of Holstein, passed away on Saturday, December 31, 2022 at the Good Samaritan Society of Holstein.

A private funeral service was held on Saturday, January 07, 2023 at the First United Methodist Church of Cushing with the Pastor Jon Montgomery officiating. Burial was at the Cushing Cemetery of Cushing. The Nicklas D. Jensen Funeral Home of Holstein is in charge of the arrangements. Online condolences can be made at nicklasdjensenfh.com

She attended Lone Star Country School until sixth grade when she entered the Holstein public schools. She graduated from Holstein High School in 1952 with Valedictorian honors and received the I Dare You award.

She worked as a secretary in Holstein until 1955. On December 10, 1955 she married Delbert Shever of Cushing after he had spent 16 months in the Army in South Korea. Three sons were born to this union, Bryan, Stevan and Craig.

She loved her children, grandchildren and great-grandchildren very much. She enjoyed going to see all the grandchildren in their programs, sporting events, graduations, etc. And then came the great-grands and all of the pictures, birthdays, family dinners and special events, all of which she loved.

She had one very memorable experience when Nathan took her to Las Vegas to see George Strait in concert. He knew that was on her bucket list, George Strait and Alan Jackson were her favorite country entertainers.