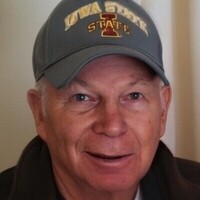 Funeral services were held at Salem Lutheran Church, rural Correctionville, on Saturday, January 7 at 11:00 am with Pastor Jody Still Herbold officiating. Burial was in the Kingsley Cemetery. Online condolences may be sent to rohdefh.com.

Roger was born on September 9, 1939, the son of Earl and Leona (Petersen) Reinking. He grew up in the Kingsley area and attended country school through 8th grade. He then attended Kingsley High School and participated in football, basketball, track, baseball, Boy’s State, Honor Society and other activities.

Roger taught math and physical education, started the football program, and coached football, basketball, and baseball at Remsen-Union High School from 1962 to 1970. He then left teaching and began farming with his father which led to a lifetime career of good farming practices while raising corn, soybeans and cattle.

On October 28, 1972, Roger was married to Joan Beaman in Denison, IA. They lived on a farm near Correctionville and became the parents of two sons, Mark and Dean. These were busy years as the boys grew and participated in many activities, always supported and encouraged (and sometimes coached) by their Dad. He refereed basketball games and enjoyed a bowling league at one time.

He also went back into coaching basketball at River Valley High School in the 1990’s. Roger supported his church, Salem Lutheran, by serving as treasurer. He was on the church counsel and served on various committees through the years. He served on the Board of Directors of Farmer’s Co-op Elevator in Pierson, IA and several years later, on the Board of Western Iowa Co-op. He also was a Director for the REC electrical co-op in Moville for a number of years.

Roger and Joan spent many hours over the years enjoying golf courses across the country, playing in leagues, couples’ tournaments and just out enjoying the game. Some favorite courses were in the Black Hills. They enjoyed taking road trips to National Parks and other historic areas, usually finding golf courses along the way. Trips to Alaska, New England and many meeting destinations were enjoyed.

He also became a fan and supporter of the local high school sports teams, Iowa State Cyclones, and Morningside Mustangs and attended as many games as possible.

Roger did everything well, but he excelled at being a grandpa and loved the time he could spend with grandkids. Those left to cherish his memory are his wife, Joan of Kingsley; sons Mark (Lisa) of Ankeny, IA and their children Alyse, Jude, William, and Robin; and Dean (Jessica) also of Ankeny and their children Noah, Lucas, Evan and Isaac; a sister, Ruth White of Clive, IA; a sister-in-law and brother-in-law, Linda and Eldridge Drury; nieces, nephews, cousins, and friends.

Roger battled a diagnosis of multiple myeloma for 12 ½ years with determination and courage.

He was preceded in death by his parents Earl and Leona, a sister Peggy Wielenberg, brothers-in-law Larry White, Norbert Wielenberg, and James Beaman, and parents-in-law, George and Ione Beaman.