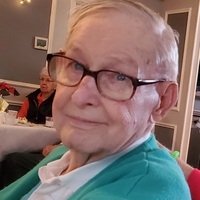 A Celebration of Life will be held 2pm Wednesday, January 18, at Waterbury Funeral Service of Sioux City 4125 Orleans Avenue, Sioux City, Iowa. A Visitation will be held one hour prior.

Dick was born December 6, 1931 in Renwick, Iowa to Raymond and Frances (Braumlouie) Larson.

He received his education at Vernon Consolidated School, graduating from Vernon High School in 1950. Dick was very active in vocal music and also enjoyed success in the basketball & baseball venues.

After graduating, he worked at the Renwick Community Creamery and served 2 years in the U.S. Army, with most of his time spent in Germany. He received an honorable discharge on October 7, 1951.

Dick was united in marriage to Joan Wilhelm at the Lutheran Church Laverne, Iowa. The couple made their early home in rural Hardy and later moved to Humboldt. Dick then began a life-long career in sales that eventually led he & Joan to Des Moines and the Herman Brown Heavy Equipment Company.

He married Delores Dodds on September 24, 1988 in Arkansas. Dick & Dee continued living in Sioux City and eventually moved to a new home in Moville, Iowa.

In 2001, the couple moved to Bella Vista, Arkansas for retirement. Dick was an amazing golfer, Dee considered golf to be the love of his life! They enjoyed the many friends they made in Arkansas and having relatives and friends come to visit.

In 2017 they returned to Sioux City to be closer to their families. He also loved his animals; especially his dogs, Lady and Maggie and Katie, the stray cat. Dick was a jolly person who loved everyone.