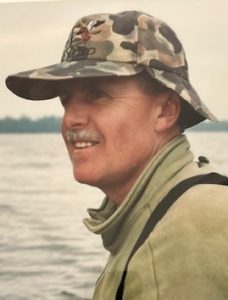 Jerome “Jerry” Edward Adams went home to Jesus surrounded by family on January 14, 2023, after decline caused by stroke and ongoing challenges with Parkinson’s.

He met his beloved wife Peggy Ellen (Hamann) Adams at Morningside College in Sioux City, Iowa, where he was captain of the football team. The two married in 1963 and they would have celebrated their 60th anniversary on September 1 of this year.

The two lovebirds moved to St. Louis, Missouri where Jerry started his career as a CPA with Ernst & Ernst. Together they started their family – Stephanie Harris (Bob Lawrence), Suzanne Ilene (d.), and Eric Adams (Ann). Jerry loved sharing his passion of the outdoors with his family. There were many trips and adventures that included fishing, skiing, hunting, hiking and even running. In 1983 they purchased a lake home where even more amazing memories were made with family and friends.

Jerry was an astute businessman and leader who held many positions of respect including CEO, CFO and President. He also gave back by serving on the Blackburn College trustee for many years.

One of his most prized achievements was founding the St. Louis Track Club. His passion for running and all it has to offer, began an organization that encourages health, running and even walking to keep fit. If there was a day that Jerry didn’t run, it was rare. Thanks to his vision, so many have benefited as the sport and club have grown exponentially since the club’s inception.

His legacy continues and flows to his grandchildren Bailey (Joshua) Shore & Eric (Courtney) Harris, Jack, Grace & Luke Adams, and great-grandchildren Matthew, Benjamin & Gabriella Shore and Maverick & MacKenzie Harris. Dad, Grampa, Papa Jerry, loved hearing about everyone’s accomplishments, and took pride in what he had instilled in us all. No quit attitude, running, love of the outdoors – hunting & fishing and the beauty of an early morning. If we see a beautiful sunrise or sunset with ducks or geese flying overhead, we know he will be there with us.